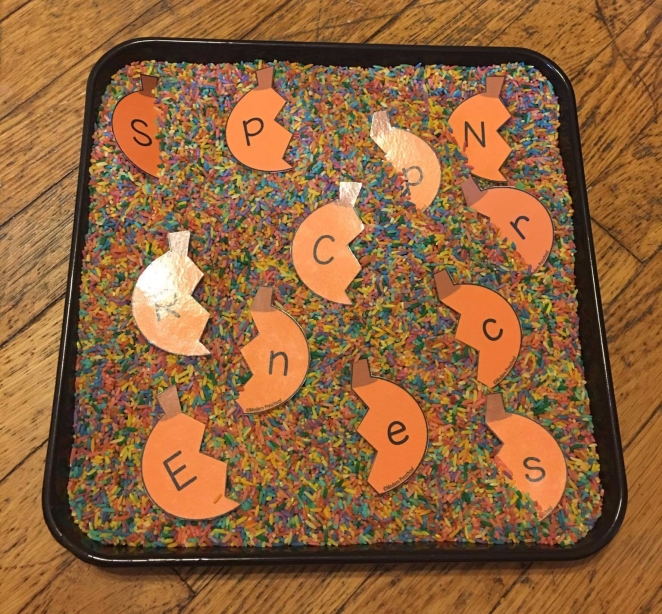 When Spencer was younger I followed a bunch of teacher turned homeschooler blogs.  I printed out all of the free printables.  I spent hours cutting and laminating and re-cutting.  I had a toddler that put EVERYTHING in his mouth and I didn’t wan’t him ruining the games that I made.  I even made two cubes out of card board to hold letters and pictures so that he could learn the alphabet.  I made file folder games, puzzles, play dough mats, you name it, I tried it.  You know what? He played with things for less than five minutes before declaring he was done.  I would get so frustrated and decided he was too young.  That was a six months to year ago.  He just turned 4 and the last month or so he has been begging me to teach him again.  So of course I am super busy.  I decided to run for Town Clerk and pretty much every waking minute not tending to my family is politicking.  I also had been commissioned to make three blankets this year and I have several other crochet projects already lined up.  Oh and I joined Junior League.  To say I have a lot to do is an understatement.  But of course my son comes first.  Today I set up a new game.  Which of course I had to bribe him to play.  He really wants to learn his letters in theory, but he doesn’t want to put the effort into it.  He is pretty good with his numbers, and great with shapes, colors and patterns.

You are supposed to teach them the letters of their name first.  Those letters are the most important to them.  Spencer does know ‘S’ it is the only letter he regularly recognizes.  ‘P’ is hit or miss.

Today I took out the colored rice I made his alligator tweezers, his handy squeezers, (These are toys to help develop their fine motor skills), the pumpkin puzzle and a small cookie sheet. Last fall I had printed out a pumpkin alphabet puzzle from Modern Preschool. I separated out the S-P-E-N-C-R and hid the little and big letters in the rice.  He used his tweezers and gripper toy to dig for the letters and then I had him match them up as he found them.  He had fun in the beginning, but quickly lost interest. I reminded him that he wants to learn his letters and the way to do that is to play with them. 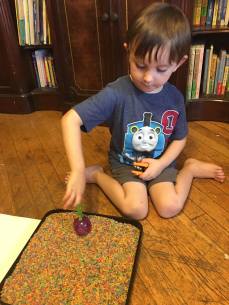 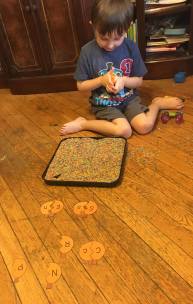 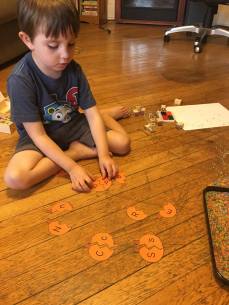 It is a little frustrating that his name has 2 E’s in it.  All the sets I have come with one E.  I wish at the end of their printables they offered the option to print additional copies of certain common letters.

If you are interested, some of the blogs I find especially helpful are:

Please let me know if you tried this activity with your little.