My grandparents bought a house on Pipe’s Cove in Greenport back in the 1950’s.  I grew up on the beach.  I absolutely adore it out there and some of my fondest memories are of spending the summers out there.  My father used to take my brother and I on a nature walk down the beach and then up the “Indian Path” as he called it.  Now I get to take Spencer down the same beach I walked as a child, and I am loving every minute of it.

There is so much to see at the beach,

all you have to do is stop and look

If you own beach front property, you don’t own the water.  The government owns 10 feet above the high tide water mark.  So that means as long as you stay down by the water you can walk on the beach.  Rarely I will see people down on my beach, but that is mostly because there is nothing of interest really down by me.  Two houses down there is no beach.  The grass just ends at a wall and the water comes right up to it.  When I was little I would play down there at low tide because there was more of a chance to chase what I called tiger fish around than there was on my beach.  They really like the shallow water and the sand there was all level.  The water in front of my house takes a few dips before it levels out, so the real shallow strip is very narrow.  At low low tide a strip of rocks appears.  The rocks are big enough for little crabs to live underneath them.  When I was a child my neighbor and I used to flip the rocks over and catch all the crabs.  We always used to think that they were baby crabs, but recently I leaned that they are an invasive species called the Asian Shore Crab.  Apparently not only do they eat the food that native crab species would eat, but they also eat baby shrimp and baby lobsters.  This summer I flipped the rocks over and showed him the little crabs and he shrieked in delight as they ran away.  I even caught one for him. 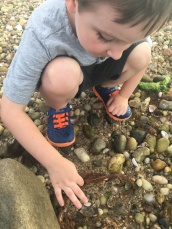 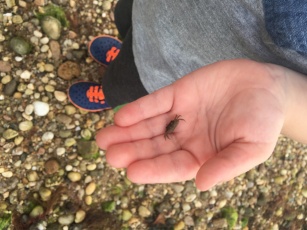 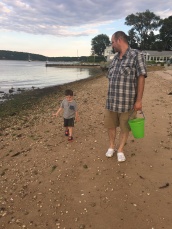 My neighbor has a bulk head at the far side of his beach.  I have always found that some of the best shells wash up there.  If you dig down under the larger broken shells you can find really small shells there.  Another good place to look for baby shells is under the sheets of dried tangled seaweed.

If you are very lucky you will find a whelk egg case.  They are about 8 inches long with a long rope like structure with what looks like little round leaves.  The whole thing is a light tan color and is very rubbery feeling.  If you look at the little lobes you will notice that there is a hole right in the middle of the end. If you open up each lobe you will find tiny little shells in there if you are lucky and it hasn’t ripped open.  When I was little my dad would give us a box of the thin pretzel rods for finding the first whelk egg case of the season.

We also used to find shark egg cases.  Those are black little pods with four long projections coming out from each end.  The sharks in the bay are Dog Fish.  From time to time a dead horseshoe crab would wash up on shore too.  Fun facts: Horseshoe crabs are more closely related to spiders than they are to other shell fish and they have been around 445 million years.

As you walk around the bay the beach changes.  What I mean by that is there are specific areas for certain things.  The two houses down from my neighbors has very white powdery sand before their bulk head.  The end of their bulk head is how I tell how deep the water is.  If the water goes over the top, its high tide and a good time to go swimming.  If you can see the dark line half way down the bulk head it is low tide and you are going to walk halfway across the bay to get to water deep enough to swim in.  My uncle used to go clamming in between the two bulk heads when I was a girl.  As you jump down the bulk head the beach becomes rocky again.  A few houses down there is eel grass and the sand gets really muddy.  This is where the muscles live.  When it is low tide some nice tidal pools form and I used to sit and watch them to see what animals got stuck when the tide went out.  Further down the beach becomes a beach for the development that was built when I was a teen.  There is more sand and wild grasses there than anywhere else.  The bay sort of ends over there and goes through a narrow straight. 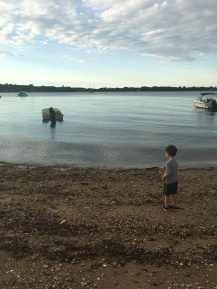 Spider crabs and Atlantic Rock crabs live and breed in the straight before they move out to the bay.  Once through the straight there are two large ponds.  The one to the left is where the Blue Claw crabs live.  As you walk from the straight to the small bridge that goes across to a road, you will see lots of small fish, hermit crabs and if you come at the right time of day, a Fiddler Crab migration.  What is interesting about these crabs is each one digs their own hole.  At dawn and dusk they go out to eat.  The males have a much larger claw on the right side simply to impress the females.  They are skittish and if you walk after them they will run and try to get in their holes, or wave their big claw at  you if its a boy.  I have never been in either of the pods.  Rob and I just rented a kayak last year through a rental company and we all loved it so much we did it again this year.  I told them my goal was to get into the little ponds at the end of Pipe’s Cove and they said they will drop the kayak off at the house for me if that is really where I want to go.  It is definitely a trip just to the start of Pipe’s Cove from the rental place. 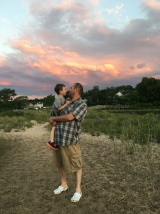 This season the bay is so healthy.  There are tons of Scallops, Quahog clams, Razor clams and Soft Shell clams, Oysters, Whelks, Spider crabs, Blue Claw crabs, Rock crabs, Asian Shore Crabs, Muscles, Jingles, Slippers and I even found an Atlantic Moon Snail.  On our first walk of the season, there had been a big rain storm the night before and I was lucky enough to find two small Blue Claw’s where there are normally Fiddler Crabs.  I even got a video of one posturing with me.

The second nature walk we took we saw a school of baby Red Snapper and Pipe Fish.  I had never seen either of those; unfortunately my phone was dead and I couldn’t take any pictures of them.  On the way back we always take what my Dad called the “Indian Path”.  It really is the path that goes from the street to the beach.  My Dad used to tell us ghost stories of the Indian tribes that used to live in the area, and when we walked on the path just after dusk he would pick up the small pebbles and throw them into the surrounding trees.  I remember being so scared and thinking that the ghosts of Indians were really going to come out and get us.  This year I started throwing the rocks when Spencer walked down the path and I couldn’t help but chuckle to myself every time he jumped a little just like I used to.  I haven’t started the ghost stories yet, though this fall I might have to.

Where do you go to take a walk down the beach?  When you plan a trip to the beach, do you leave time to beach comb?  Join our Facebook group and let us know.  I would love to see your smiling littles on the shore.