I don’t know if  you had heard that Micheal’s was doing a free slime event yesterday from 1 pm – 3 pm.  Tracy and I have just started a Mom’s Facebook Group called A Beautiful Friendship – Kids and Tots Time (if you are in the Tri-State area you should join it)  One of the Admins had posted the slime event video Micheal’s put out to let everyone know about the event.  I was so excited because I have been wanting to make slime with Spencer for the longest, but most of them have Borax in them and with him still sticking everything in his mouth I have been holding off.  This is a kid friendly recipe with no borax, so I was totally on board.  In the video the woman repeatedly said that someone was making ALL the slime and it was being shipped out to all 1,500 stores across the nation, and not to worry that they wouldn’t run out of slime.  That some stores were expected to get up to 150 people coming, but they would not run out of slime.  I figured this was a home run.  The slime was pre-made and they were giving us all the sparkles, pom poms, sequins, googly eyes, pony beads and little critters to put in the slime.

We got to the store in Pelham Manor about 5 minutes early.  When we get inside, the line was all the way done one aisle.  I was like damn so much for us being early…. But I figured it wasn’t going to be all that long of a wait because the slime was pre-made and at most ppl would play for like 10 minutes until they all figured out what fixings they wanted in their slime.  WRONG!  At least 20 minutes later the first group comes out.  The second group goes in, another 20 minutes.  The third group goes in… ANOTHER 20 minutes.  I had told the mom in front of me all about the video I had just watched last night on Facebook, she must have thought I was nuts.  Do you know how hard it is to entertain a 3 year old in a line for an hour?!  He was REALLY good I have to say.  A boy behind us played with him for awhile which was awesome.  Needless to say, it was pretty rough.  Turns out, that we were making our own slime.  I realized this after the second class went in because I could see through the glass doors what they were doing.  So not what I was expecting.  I was like okay this is still okay I can make it for him.  We finally get in and they do not use the recipe that Micheal’s website had posted.   Yes I totally checked out the recipe after watching the whole video because I wanted to know what was in it so I could buy the supplies while we were out.  Spencer isn’t a huge fan of gloopy stuff that sticks to your hands.  He wouldn’t finger paint as a baby, he was like the only baby with a paint brush with his finger paints.  We made this foam like moldable clay stuff last year, he wanted nothing to do with it.  But slime I had a feeling he would really like.

Anyhow we get into the room and we sit down.  They have these glue bottles with a mark on them, put the glue down to the mark in your Styrofoam cup, pick a color of paint and mix it in.  Then it was time to add in your mixers.  Which they did one child at a time, which I understand why, but there were 12 children in each class.  Then it was add the 1/2 of a teaspoon of baking soda, but they gave you a plastic teaspoon like what you would use at a party.  Mix again and then add one spoonful contact solution.  What? What happened to the warm water? What happened to mixing all the stuff in after you made the slime?  What happened to following the recipe online? What happened to it being pre-made for us?!

So of course our slime doesn’t work.  I guess I put too much contact solution in it or what not.. but it was wet and hard.  And wouldn’t bend so much.  I asked if I could save it by putting in more baking soda.  No.. apparently the contact solution fixes the material and once you add that there is no going back.   Well my friend that was meeting us there got there later than we did and she was like 3 classes back too.  Spencer agreed to wait again to make more slime.  So we waited and waited and waited.  And then there was an epic fight over people jumping the line that went on for a good 10-15 mins.  The woman that had gotten skipped was asking us our opinion and we both said that we understood why there was a problem and yes we would be annoyed if it happened to us but at the end of the day you are wasting more time because now the class isn’t doing their thing  because you were carrying on.  Sigh.  What a mess.  So we finally get in as the last class of the day.  And again my slime was bad.  Spencer did all the mixing this time.  Which I was really happy about.  I felt badly I didn’t let him mix the first time. 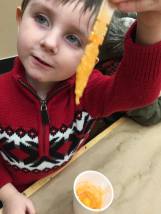 Oh and I didn’t tell you the best part about the slime we made.  It left this white solution all over our hands.  On the way home, one of the eggs was on my phone and my screen was covered in white stuff.  At home we played with the slime after dinner.  I dried it on paper towels.  One of the eggs was on the kitchen table and I woke up this morning to my table covered in this solution and it literally ruined a spot on my table.  Thank God I was already planning on refinishing it this spring anyhow.

So… what did Mamma Do?

Mamma made the slime as per the recipe on Micheal’s website and it turned out awesome!  I made it after Spencer went to bed because if we were going to have another disaster he didn’t need to know about it.  Spencer won’t know about it until next Sunday when he wakes up on Easter morning and he has a large egg filled with all the slime I made him. 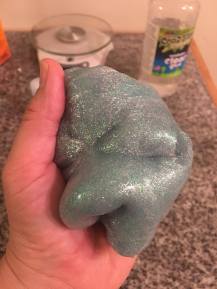 My one suggestion is don’t add too many sparkles.  I think I over did it a little bit and the consistency is a little off.  Instead of stretching perfectly in snaps.  But honestly its fine.  He is going to love it.  I just know for next time to lay off the sparkles a little.