Last week was a really rough week for me.  I just wasn’t sleeping, we had a lot of problems with both of our cars and it was overall just a mess.  My husband worked  30 hours of over time the week before and 16 hours over time last week.  It’s always very hard for me when he works that much OT.  I seriously don’t know how single mothers do it.  They deserve so much credit.  Anyhow, we rescheduled Saint Patrick’s Day for Monday 3/20.  Rob had three days off in a row so he would be fully recharged and ready to go for all the festivities and it gave me a few more days to prepare.

I don’t know if you have heard of Naked Eggs but they are amazingly fun.  We did Rainbow Naked Eggs from Schooling A Monkey.  They take between 48 -76 hours for the shell to completely break down in the vinegar.  So in theory for them to be ready for Saint Patrick’s Day we would have had to set them up on Tuesday, and that just didn’t happen.  Spencer and I ended up doing them on Sunday right before bed so they weren’t even ready for our rescheduled Saint Patrick’s Day but that’s okay.  We just finished part 1 as a family and set up part 2 today.  When the eggs are ready either tomorrow or the next day I will share our whole experiment with you.  So stay tuned! Update – Find the full experiment here!

Last year I found on Pinterest a bunch of fun activities to do with Spencer. One of them being Leprechaun Rocks. Pretty much all you do is the night before make a paste of baking soda and water.  You want the paste to be kind of thick so that when you go to stir it the spoon doesn’t really move.  I put the food coloring in before it gets to this point.  Honestly what I did was follow her suggestion of how much baking soda to put in, poured the amount of water in, put the dye in and stirred it around.  I made the first ‘rock’ and it was way too runny so I put more baking soda in until it was a nice firm mold-able mixture.  Make balls of the stuff and stick a gold coin in. After making several huge rocks I decided I was going through it too fast and I pared down the rocks quite a bit.  In the end I had a bunch of rocks to hide all over the apartment.  I decided to let them sit on the stove for a couple of hours while I finished prepping my other activities and then put them out before I went to bed.  He has been back in our bed lately and I didn’t want him to wake up without them already being out.  You can tell your child some story about Leprechauns being little tricksters and they left you a note saying to use this solution to find what is inside their lucky rocks.  Really you just put a bowl of vinegar out and watch the rocks explode.  If you have a back yard or a patio maybe this is an activity you should do outside.  If you don’t like me your floors will be white until you mop again, or you could always put down a shower curtain to help with the mess.  If your kids love a good Easter Egg hunt they are going to love finding the rocks that those tricky little Leprechauns left everywhere. 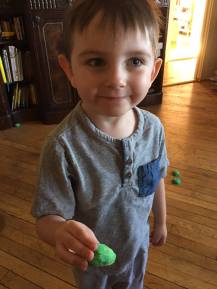 I found this cool recipe for Metamucil Slime over at Little Bins for Little Hands.  I have been wanting to do slime with Spencer for a long time now but most recipes use borax and he still puts everything in his mouth.  I figured I had to wait a few more years until I introduced slime into our play routine but this recipe fit the bill for easy, on hand and quick.  Rob started taking Metamucil a few months back and I have a ton on hand.  You just take 3 teaspoons of Metamucil and stir it into 1 cup of water.  Bring it to a boil for 3-5 mins.  (I stirred constantly because I can’t let something like that sit in my pot)  Let it cool.  As it cools it thickens.  Heat it to a boil again for 3-5 mins.  Let it cool, it will be thicker this time.  Heat it again to a boil and as it cools this time it is done.  It is almost a little too thick after three boilings.  I put green food coloring in the water before I boiled it.  When I was done I put three different colored sparkles in it, light green, dark green and yellow.  This didn’t keep him as entertained as I was hoping.  He has never really liked slimy things on his hands so I wasn’t too suprised.  It was for that reason that I made it as thick as I could, but then it didn’t really stretch all that much.  Next time I will boil it only the two times and hopefully he will be more interested in it. 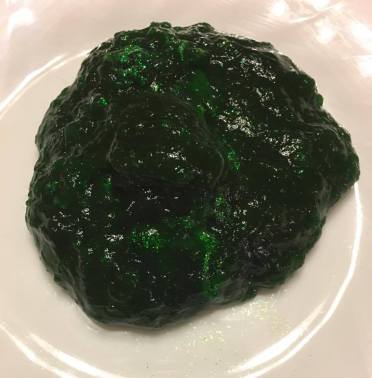 I had gotten some cute small Leprechaun hats last year and I forgot to use them so I made sure to use them this year.  I set up the Rainbow Fizzy Pots and covered five of them with the Leprechaun hats and I left one in the center of the table with gold coins scattered around it.  Behind the hidden Fizzy Pots I had the Rainbow Naked Eggs Experiment.  The table was looking quite festive and I was so excited for the morning.

Spencer has been all about coloring lately so I wanted to find him some coloring pages to do.  I found this nice one by Krista Wallden at Teachers Pay Teachers. Apparently Spencer doesn’t like leprechauns at all and didn’t spend very much time coloring.  He pretty much complained the whole time, it was kinda funny.  Normally he asks for more paper and can’t wait to color.  Lately I have been giving him plain sheets of paper, crayons and stickers and he will go to town for at least 30 mins.  Lita had given me clover stickers but I will be honest I forgot to offer them to him.

Daddy had to go out for a little bit, but when he came home we did Rainbow Fizzy Pots.  I am having a hard time finding the original post that I got this from.  The idea is you set up little cauldrons  with baking soda and food coloring.  Last year I think I used the dye pellets you get for dying Easter eggs and I buried them under the baking soda and put matching sparkles on top.  Lets be honest, EVERYTHING is better with sparkles.  You can leave them out if you aren’t a fan.  This year I wasn’t as organized and I used my gel food dyes and it didn’t work as good as the tablets.  The color took a little longer to be reached and so there was a lot of white fizzing before the cauldron actually turned a color.  I had gotten little pipettes to drop the vinegar into the cauldrons but it wasn’t enough fast enough to cause an exciting reaction.  So Daddy just started pouring the vinegar into the cauldrons.  The pipettes are good for fine motor skills, just not for this particular activity.  We have an Amazing Savings by us and I got the little candy dishes there for like a dollar for a four pack.  You can’t beat that.  I have used those candy dishes for so many great activities. 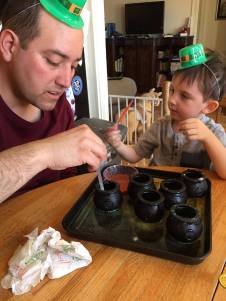 The boys had so much fun doing this activity together.  I just couldn’t take enough pictures of them.  Like I said before, Rob has worked a lot of hours lately so it was really nice to watch the two of them play all day long.

My Mom came over in the afternoon to celebrate with us.  She brought us two amazing packages of corn beef.  I had my big stock pot on the stove and threw the corn beef in with the accompying spice packets along with some cloves and bay leaves.  I boiled the corn beef for about three and a half hours.  At about three hours I put in the sliced carrots, cubbed red potatoes and the cabbage.  While this was cooking we made a delicious Irish Soda Bread following the recipe I found at Epicurious.  My Mom used to make a delicisous bread with butter milk, raisins and carroway seeds so I just did a google search and came up with this recipe.  It was absolutely delightful.  My mom always used to bake the bread in this big green bowl.  I have that bowl now and she said it was really nice seeing me bake the bread in the same bowl she had. We subsititued in dried apricots for half of the raisins and it was delicious.  She told me a little secret to get the fruit to stay suspended in the bread.  She said take some of the flower mixture and pour it over the fruit and coat the fruit.  Then add the coated fruit to the mixture.  Boy was she right.  The fruit was evenly distributed through out the bread.  My Mom was always great cook and is full of all sorts of tips and tricks. 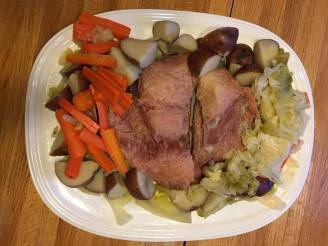 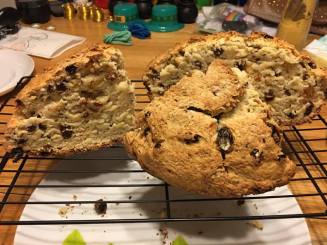 While dinner was cooking we  all played a Saint Patrick’s Day Bingo game with skittles.  I found the free printable at Crazy Little Projects.  I put the skittles in the little cauldrons.  It was perfect, except that I didn’t dry the cauldrons all the way so the skittles started sticking together.  Definintely make sure you dry them completely before filling them with sugary candy.  Spencer won the first game, Nana won the second and we didn’t quite make it thorugh the third game.  Someone was eating a skittle every time a card was turned…I won’t mention any names.  The game was great and held his attention for a good 30 minutes which is amazing for a three year old.

All in all, we had a wonderful time.  The dinner was delicious. There were plenty of activites to pass the time.  The soda bread was amazing and has been my breakfast the past few days.  I am so happy we allowed ourselves to reschedule the day to a day when Daddy could be home and we could all celebrate together.  What did you do for Saint Patty’s Day?