At the beginning of 2017, I vowed to get my personal pictures in check.  I spend so much time editing other people’s  photos and my own continually get pushed to the back burner.  Don’t get me wrong, I edit tons of pictures of my children.  But it is probably only one fifth of the photos I force my husband and children to capture.
I had started a side-by-side series of photos when Brady was born.  It all started when he

took a photo that closely matched one of Xander’s newborn photos.  Besides me buying Bradyn a hat that sort of matched his older brother’s, I did not set up this photo replication. I actually did not even notice until I started editing them.  But the adorable side-by-side composition of my two sons made me happy.  So I continued to recreate a bunch of Xander’s photos when doing Bradyn’s photo shoots… and this is how the Tamucci-brothers-side-by-side-series was born.

I started this on-going photo project and I am very behind.  I have edited some of my favorite pictures, but there are many folders filled with raw, unedited photos on my hard drives.  And I know if I do not edit them soon, they will just get lost in the digital abyss. 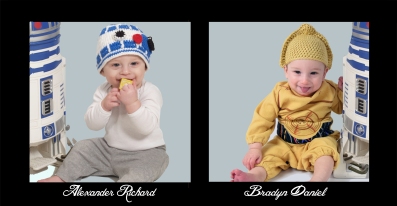 So I created this photo challenge: To edit ONE family photo a day in 2017.  But I quickly realized that was setting the bar too high and Amy suggested I do one a week.   Originally, this challenge was just for me. It wasn’t about a post, or photos being shared on social media, but I hope that by putting it here,  I will be held accountable – hopefully helping me to actually finish my challenge.

There were studio pictures taken at 3, 6, 9, 12, 18, and 24 months for each of my boys.  I have only edited 6, 12,  and 18.  When I finally pledged to edit them, that meant the whole session, not just one or two pictures that I like.  If I am going to force my husband to take these pictures, and my children to pose for them, I need to do my part.  So that means treating my own photo sessions the way I would a client’s.  Which involves sorting through all the pictures and editing around 30-70 photos per session. There are also a bunch of non-studio (on-location) photos I would like to FINALLY make time to edit…  So stay tuned for more photos. Who doesn’t love a good challenge?

*If you liked this, please share it with your friends!

One thought on “Photo Challenge”